Posted by jean-Pierre Reichenbach on December 18, 2017

Works for Cello and Piano
by Hovhaness, Barber, and Pärt 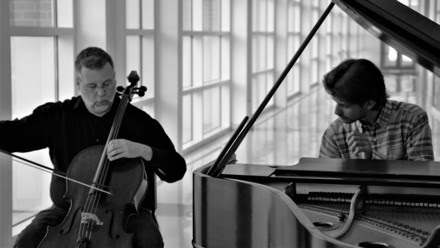 Following the release of their latest recording, cellist Eric Edberg and pianist John Kamfonas present a program that includes two sonatas by American composers Alan Hovhaness (1911-2000)  and Samuel Barber (1910-1981). Despite their divergent styles, these two composers chose to forge their own musical paths that veered away from the conscious cultivation of an “American” contemporary musical identity occupied by their contemporaries Aaron Copland, Leonard Bernstein, and Charles Ives among others.

Hovhaness’ exposure to the vocal music of Armenian priest and composer Komitas Vartabed inspired his lifelong travels throughout Asia where he constantly learned and appropriated traditional music styles of Armenia, India, Japan, and Korea. In Barber’s case, his early exposure to the operatic tradition through his aunt, the celebrated contralto Louise Homer, and through travels to Europe produced an affinity for lyrical melodies that would manifest themselves in many of his compositions. This shared early love for vocal music further unites these composers as it inspired a poignant lyricism present within these sonatas and throughout their musical outputs. Complementing these works, the program features other pieces by Hovhaness, Arvo Pärt, as well as duo improvisations inspired by this music.

Free and open to all
RSVP

Classical and improvisational cellist Eric Edberg has been heralded by the Washington Post for his “excellent solo performance,” and by the Appleton Post-Crescent for playing that was "both faultless and effortless, a pleasure to observe and enjoy.”

Embracing his penchant for improvisation alongside his passion for the classical and contemporar repertoire, Greek-American pianist John Kamfonas has given performances around the world, from New York to India, Paris to Beijing, which have been described as possessing "a grandeur that lifted the music into the sublime...and a delicacy that took one's breath away." (National Herald, New York)